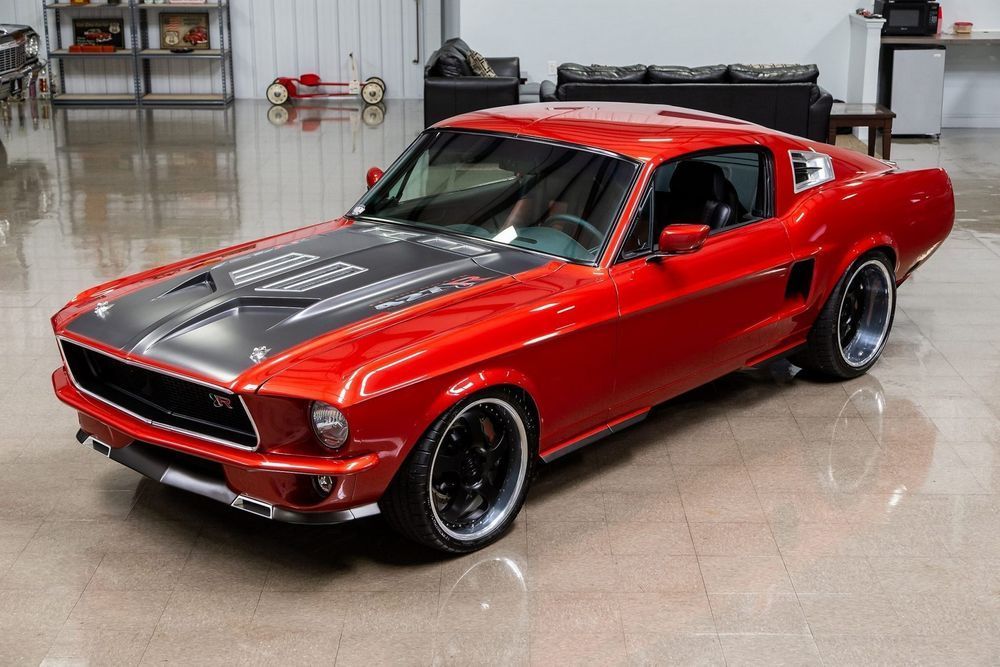 While there is a lot of worth in a perfect number’s matching car, restomods offer the best of all worlds.

When people first started ‘restomodding’, the car community was somewhat skeptical about the trend. However, after seeing what kinds of builds have come out of the practice, this way of automotive modification and building has become a mainstay in the car community. Here are some of the coolest muscle cars that were made as a result of the restomod niche.

We could write several features on Ring Brothers' builds alone. At the 2017 SEMA Show in Las Vegas, Ringbrothers showed up with a murdered-out, heavily-modified 1969 Dodge Charger named “Defector.” People were really excited about the muscle car since it took a beloved model and improved on it while preserving much of the factory aesthetics, even if pretty much everything was black.

Since it's premier at the SEMA show, it's gotten a Hellaphant engine swap. As a supercharged 426ci Hemi V8, the Hellephant is appropriately named for its displacement. It’s also strong like an elephant, cranking out 1,000-horsepower. People were understandably excited and all Hellephants were sold out within 2 days of the engine becoming available to order online. Mopar says it made about 100 units.

Licensed by Ford Motor Company, Classic Recreations has a high reputation for their high-quality custom Ford builds. The most recent concoction to come from the Oklahoma-based company is a high-powered 1969 Ford Mustang Mach 1. Nicknamed the "Hitman", the Mach 1 will join other Ford licensed Mustang builds such as the Boss 429 and Boss 302.

Starting off with an authentic Mach 1 shell that has been restored to a factory-new state, Classic Recreations then stuffs the car with a potent power plant in the form of a twin-turbocharged Ford 32-valve Coyote V8 engine. With this setup, the "Hitman" generates 1,000-horsepower. Yes, you read that right, this classic will have 1,000 ponies under the hood ready to gallop.

Built by Foose Design, this LT4 Camaro restomod is impressive. The build started off with quite extensive fabrication work, interior work, and restoration. Powering the build is a LT4 engine, the same engine that powers the C7 Chevy Corvette Z06 and Cadillac CTS-V. It exhales through a MagnaFlow exhaust system and it rolls on a Roadmaster Shop ’67 – ’69 Camaro SPEC Chassis. The Deep Impact Blue painted Camaro rides on MHT Foose Star Thruster wheels and gets stopping power from Baer brakes. Like several other restomods on this list, this was shown off at the SEMA show in Las Vegas.

The aggressive classic muscle car rides on a C6 Corvette style suspension, with upgrades from Detroit Speed and Woodward at the front, and a unique SpeedKore fabricated four-bar suspension with Penske double-adjustable shocks taking duty at the back - with front and rear sway bars further helping with body roll and handling. Stopping power comes from Brembo brakes, and the impressive Dodge muscle car rolls on a set of HRE S201 3-piece wheels, wrapped in Michelin Pilot Sport 4S tires.

Before the Ringbrothers got their hands on the car and gave it the ultimate restomod treatment, it started life as an original '67 Ford Mustang fastback. The stunning shade of Copper Burnt Orange Metallic is sprayed over carbon fiber body panels. Over 70 billet aluminum machined parts can be found on the build, and a set of 19-inch iForged alloy wheels sit on all four corners. Even more, the exterior features a Gemini Technology Systems carbon fiber composite hood and trunk where 400 hours worth of labor were spent alone. We can only imagine how much time was spent on this entire '67 Mustang build. The door handles were "shaved" to give the body a smoother appearance, and the entire lower valence has been modified.

Under the hood of this custom pony is a powerful Roush Performance 427-cubic-inch (7.0-liter) V8 engine that generates 560-horsepower. A Tremec 5-speed manual transmission sends power down to the rear wheels by twisting a Ford Currie 9-inch POSI rear end. Although packed full of power, the ride stays smooth thanks to a Chris Alston Chassisworks Total Control front end and Ridetech adjustable coil-over shocks all the way around.

Behind the doors is an immaculate interior complete with custom black and brown upholstery. Recaro bucket seats were bolted down on the inside with Schroth 4-point seat belts for safety. The interior was given the treatment about four years ago when the Ringbrothers customized the car for the second time.

Pure Vision’s $250K GTO Is A True Sight To Behold

Steve Strope, founder of Pure Vision, is a multiple-time recipient of the Ford award for design, has won the GM award of design, and is the host of the Velocity show Hand Built Hot Rods. Needless to say, Steve and his automotive modification company Pure Vision have made a name for themselves as one of the best when it comes to building awesome cars. Pure Vision spends thousands of dollars and sometimes close to tens of thousands of hours to create projects that can range up to millions of dollars. This 1971 Pontiac GTO is no exception to this formula of hard work.

Steve’s friend Carl spotted this beauty sitting in a field, at first sight, he knew that it would be a good project for the shop. So they brought this 1971 GTO convertible in and began restoration. The Vision for the car was “Something I could go on a date in”, it was built to be a driver's car and it delivers on that. Sporting an LS8 mated to a 485LE automatic transmission being controlled by GM computers, this car makes considerable strides when it comes to performance. The gas tank had to be modified because of the custom long-travel chassis made by Schwartz, this allows the close to 50-year-old car to drive like brand-new.

Robert Downey Jr. might be best known for driving various Audis as Tony Stark, but Speedkore Performance Group says that they've built him a 1970 Ford Mustang Boss fit for a superhero. As if the '70 Mustang wasn't already cool enough, Speedkore went to work on this Boss complementing the classic lines with a modern look and stance.

Making this Boss look like a boss, the Mustang rides on custom HRE performance wheels that are tucked beautifully under the fenders. Those fenders, along with the hood, bumpers, front splitter and more, are created from carbon fiber, while the taillights, door handles and fuel cap are a custom billet. Even the Mustang logo in the front grille has a brushed finish with a carbon fiber background. Inside, the car is fitted with a European-inspired leather interior crafted by Gabe’s Custom Interiors, and it has the latest audio system with Bluetooth and iPod connectivity.

Steve Strope Uses His Magic To Create This 1300-HP Camaro

Steve Strope and his auto-restoration and modification business, PureVision, have become icons in the car world. From Camaro guys to Mustang lovers and even Pontiac connoisseurs, we can all agree that he and his team created some of the coolest cars to even hit the auto show circuit. So you know that when we see a new car come out of his garage, we gotta cover it. The latest project to pop off at PureVision is an incredible 1972 Camaro which boasts some insane horsepower numbers.

Under the hood is an engine bay that would bring tears to even the most affluent SEMA builder. Light gleams off of the silver engine, with the focus being put mainly on the Twin Turbos which help the car achieve an astonishing 1,320 horsepower. The engine was moved back by three inches from stock to allow for more space in the engine bay, as well as providing an optimal weight distribution. Looking up from the engine bay there is a glistening 24 karat gold plated fire shield, this option also comes on the McLaren F1 and was added to give the car a little aspect of supercar persona.

Huge Barn Find Is A Treasure In Disguise

American classic cars are top-rated within the vintage vehicle community, focusing on power and performance over mere style and prestige. Ironically enough, there isn't anything more iconic and attention-grabbing than the design of a classic Hemi ''Cuda, Firebird, or Camaro. This has made these cars subject to many members of the car community dreaming of one day owning one of the aforementioned American beasts. Unfortunately, most of these incredible vehicles came from half a century or more ago means that their numbers are dwindling. This brings forth the goal of classic car collectors such as this one, protecting and restoring the beautiful cars that brought so many smiles to car enthusiasts everywhere.