Chevelle Races Nissan Skyline And You Won’t Believe The Outcome 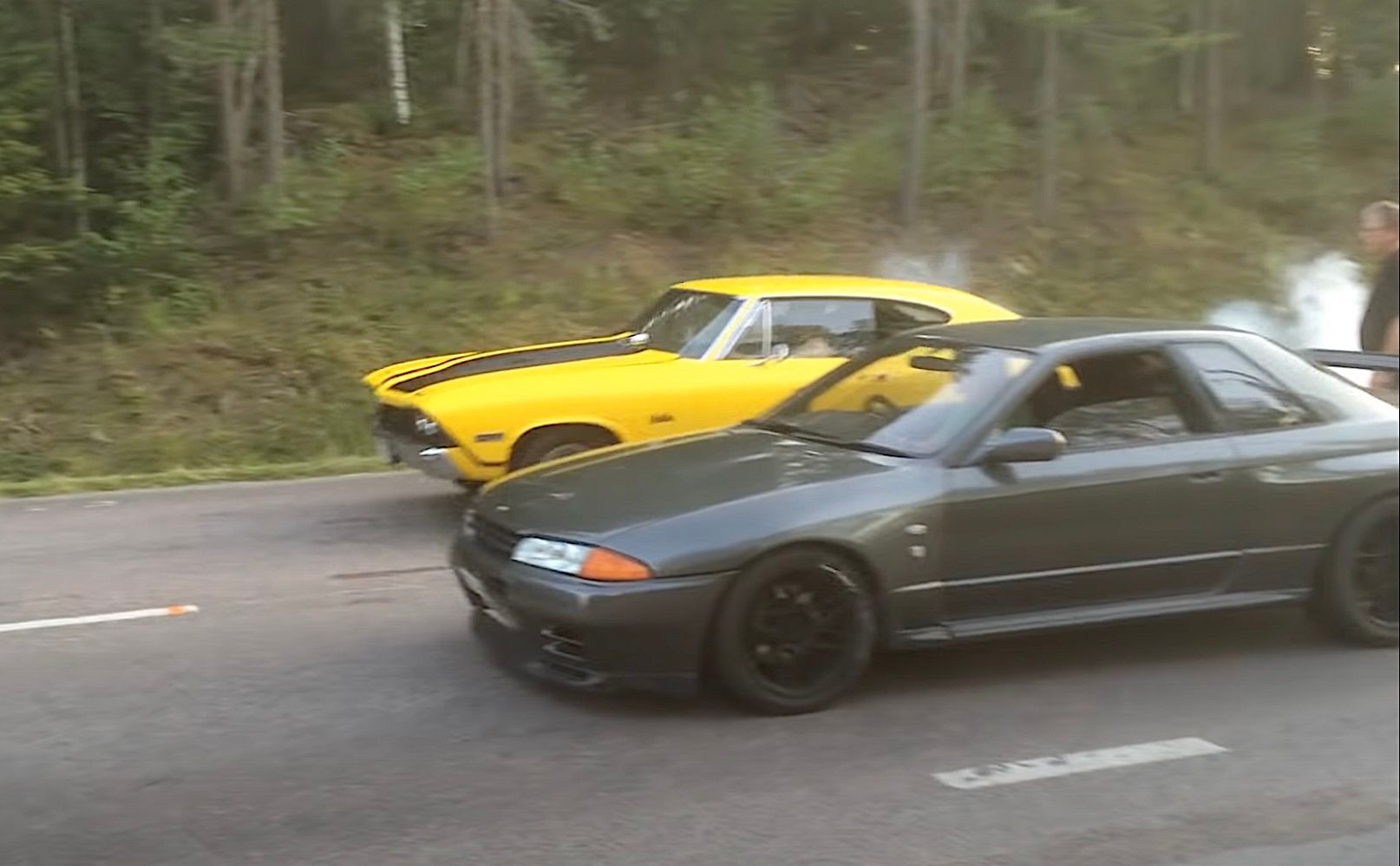 This is classic American muscle vs JDM performance.

One thing gearheads like to do is argue about which cars are better. When it’s not Ford, GM, and Mopar fans trashing each other, it’s fans of American muscle cars smack talking with fans of JDM cars. To many American performance nuts, Japanese cars are weak. However, you have to keep in mind that not all JDMs are Toyota Corollas.

In the video accompanying this post, we have a street race between what looks to be a 1968 Chevelle vs an R32 Nissan Skyline GT-R. Now, mentioning those two cars drag racing each other would make pretty much anyone laugh, because the Chevelle was built for that kind of duty so it should win no problem. However, both of these cars are pretty heavily modified. In fact, while the Chevelle is pushing 550-horsepower, the R32 Godzilla makes 650-hp. Yikes.

The R32 GT-R launched with a fury and won the race right there. Meanwhile, someone should check the reflexes for the guy driving the Chevelle. Also, he can’t even get through the gears correctly. Of course, this isn’t even close to a formal drag race, so before people start complaining we know that and aren’t saying all JDM cars are faster than all muscle cars – that would be stupid.

You can see both of these cars in action again, although they’re not racing each other. A rematch would’ve been good, because we’re not sure who would win if the Chevelle driver could figure out how to work his car.

The Nissan Skyline GT-R R32 then faces off against what looks to be a heavily-modded Hudson, possibly a Super Six. The truck is running a 540ci big block V8 with 770-hp on tap. However, Godzilla’s all-wheel drive is hard to beat off the line.

Even more interesting is watching the Chevelle take on an Audi RS4 Avant. That means yet again the Chevelle is pitted against an all-wheel-drive monster. It’s a close race and we can’t tell who won, but the Audi had a slight edge off the line. Still, if given a choice between the two, we’d want the Chevelle in our garage.

The hemi Cuda, a legendary muscle car within the classic automobile enthusiast industry. Heralded for its incredible engine options, great performance on the track, and good looks, this is the dream car of mini car people young and old. You might be surprised to find one of these vintage cars driving around town but even more surprising would be to find one for yourself. If you’re looking to get into the world of barn finds, cars like this one are the main goal of every adventure.

Way back when Top Gear was still worth watching, Jeremy Clarkson, James May, and Richard Hammond embarked on a wonderful journey across the western United States. You might remember the episode where the boys drove different American muscle cars (actually, only one was truly a muscle car, but don’t expect the Brits to understand that). There’s plenty of cringe in the episode, showing how Europeans tend to lean toward elitism, even though most of them are average by definition.

Snot Rocket, a name extremely well known within the automotive subculture that is drag racing. This record breaking mustang has amazed hundreds in person and millions on the Internet with his wild feats of speed. However, it’s possible that nobody expected for it to swing back in action yet again amazing audiences with an all new set up built for straight line speed. So what exactly makes this car so much more special since its recent performance on the drag strip?